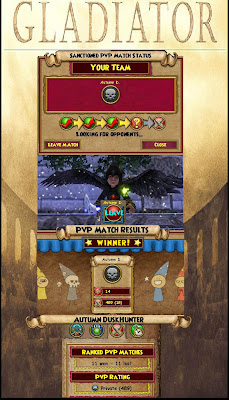 It is also the day I enrolled in the "Ravenwood School of Hard Knocks", the Arena, ranked.

After receiving advice and pointers from my PvP Elders, like Cassandra DragonHeart, Kevin Battleblood, and my sparring partner (and "Slaying Buddy"), John Lifeglen, I "dove in, with both feet" and went straight to ranked matches.


But Autumn, why ranked?
Well, I believe one can study 'just so much' from the sidelines. The view from the spectator's seat is significantly paler that the view on 'the front lines', and 'practice' means nothing is at stake, hence not as 'serious'. "Nothing ventured, nothing gained.". In Ranked, everyone brings their " 'A' Game". That's where I'll learn the most, and I've learned a lot, already. Things I must discuss with my mentors, before I elaborate further. I'm still learning, and don't yet know how much I don't know.

As a Life (secondary), I guess I should wave the leafy green banner, occasionally.
Earth Day. Green Planet.
Just as Judgement Day has passed to a day of renewal, and just as I hold that The Spir@l is heading towards Ragnarok, to be followed by renewal, there is no catastrophe that cannot be overcome with focus, persistence, and Teamwork. It's true of most thing in life.

Be Hardworking.
Be Dedicated.
Be Proactive
Be Unified.
Be Loyal.
Be Well.
Posted by Fatal Exception at 3:00 AM