Well, first thing I did was run straight to Eloise to try what The whole Spiral has asked for: stitching of wands and staffs! You know what? "Works as Advertised", wizards. Went and tested my (near antique) Amarinthine Staff with the (Crowns) Lifeforce Blade, as illustrated:
Now PvP will get even *more* confusing, as you can't tell "for sure" what your opponent has. What if, *gasp*, you could 'stitch' pets? Pure chaos!

Next, off to the Crowns Shop. There are Ram Mounts, (several varieties), and a Spirit of Nature Pet. Think "Ghost Hound meets Colossus":
And I did the Crab Alley (low level) quest line. My laptop started having extreme graphics issues, particularly with Catherine, the Glowfish, and Dr. Zigmund. The "Rocking Outfit", (which I'm told looks good), showed as completely invisible, to me. Head, hands, and feet- no torso. I'm gonna write this up as "my end", given the battered history of my laptop. Even in Ravenwood, my graphical client crashed/reset several times. I can't wait to see my outfit, lol.
I also picked up the Waterworks quest: Level? Bring Legendary Friends. Your*first* battle is against 4 Level 10 Elites. I can't say what's beyond them, *wobble*

Got my "35" Death Spell upgrade, and really don't care for it: "Dark Pact" a 500health self-hit, in exchange for a +30%, 'next attack' blade. And don't try it if you already have a Death Blade on you, because it *will* trigger. Have to test it more, but forget using it with Crit Gear, atm. Like Sacrifice, and Empower, unless you have heavy, heavy Death Resist, Dark Pact simply costs too much, for what it offers, imo.

I'll certainly do the quest again, when it goes live, "just in case".

Crafted items are now marked with the crafting 'beaker' icon, in your inventory,and at Bazaar: 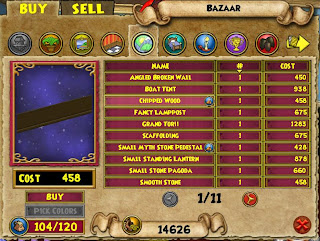 Which makes me wonder: will we be able to eventually *decompose* items into reagents? Magic 8 Ball says "Ask again later". Would make sense, though.

Also, new badges to be earned, both in Crab Alley, and in the Spiral:
More later, as the situation develops. Be sure to read the April Update Notes!