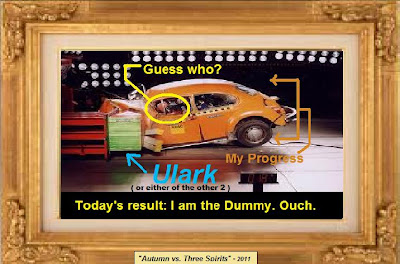 I mean, just "wow". My confidence has suffered a crushing blow, with several involuntary trips to Base Camp. I'm gonna guess this wasn't meant to be solo'ed at a mere 51. I think my highest survival was 5 rounds, with neither opponent dead. Stupid Ice mobs and their stupid 50% shields. Stupid me for doing it alone. Frustration is fleeting,though.
Sometimes you're the windshield, sometimes you're the bug.
Posted by Fatal Exception at 8:31 PM

Are you purposely soloing, or do you not have anyone to run with?

"Yes".
That is to say, my odd hours of availability, coupled with social anxiety, mean that 99% of the time, I am alone. Help is always welcome, but seldom sought.

Oh. I know how that is having odd hours lol. But luckily for me I have a room mate that plays along side me usually, so I always have a questing partner. Feel free to send us a tweet at XStormySkiesZ or comment on our blog Stormy Skies, or even send an email if you like (found on our blog) if you want/need questing help, or mercs, or whatever, anytime.

You're right in your previous thoughts: Celestia was made for co-op play. It was encouraged and vaguely hinted by the Briskbreeze Tower and Warehouse instances. Though, with a nod towards our own Paige Moonshade, you can twist up the gameplay a bit without affecting the social aspect: dual-box. Unfortunately, that does require a second account...bleh.