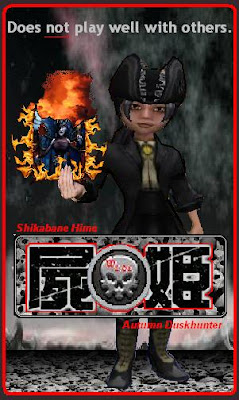 Geesh, you leave the Spiral for just a while, and all Heckhound breaks loose. Some poser wanna-be dead chick wants to strut her stuff? I'll cast my vote against that. And spiders? I HATE spiders. Unfortunately for Morgane, Morrigan, MoronJane, *whatever* her name is, 1) I've been filling my head with anime, and 2) Found out yesterday that W101 is still viable on my keyboardless (literally, I removed it) laptop. Now some dead girl wants to use the "Graveyard Shtick"? Sorry, M, There can be only one.

Not only that, but I've allowed that ever-wholesome, pillar-of-the-community Friendly to go unchallenged. Do not think that I've forgotten our mock enmity, Sir. (Disclaimer: No, we're not really enemies, I respect him utterly) And All of you with the wherewithal to stay persistent....grrr, I begrudgingly admire you.

So, now to get my hands, um...'dirty', and see how reasonable this Dead Chick wants to be. (Yeah, I know it's old news, but I need a running plotline, k?) Went and bought Lord Luna a wife, so he should be happy...or at least as happy as he ever gets.

I'm thinking there should be a contest, soon, as well..time to get the Prize Vault odometer rolling, again. Twitter brought me back to the spiral to reap, and Twitter can reap you rewards.

Welcome back to the Spiral Autumn, you have been greatly missed.