A Day at the beach

..on Floating Land, that is. Every time I went up the elevator seat, I couldn't help but be reminded of MYST. Not that that's a bad thing, at all. If you've never played it, you should, or at least read the book series.It's a great read that most W101 fans would enjoy, I believe. The only thing I didn't care for on Floating Land was those darn birds in the background. It forever felt like someone was trying to get my attention, or summoning their mount. I fell into, (but was mostly fallen upon by) various grind groups that made the collection quests fly by.
Side note: only *1* person asked before jumping in, and that small token of etiquette was verbally complemented. Asking is a good, albeit rare, habit to have. Only problematic Boss was Soulcatcher, or eater, (or whatever). He fell, third time round. Stupid Life Boss, sheesh! And another thing, the Plattapu..uh, I mean "Water-moles" are cute in an "Agent P" kinda way.

Got an impromptu invite by my friend, Kestrel Shadowthistle, who invited me to join her 'tour' of Trial of Spheres. After some convincing, I agreed, and we stumbled  through laughing and slaying the whole time. 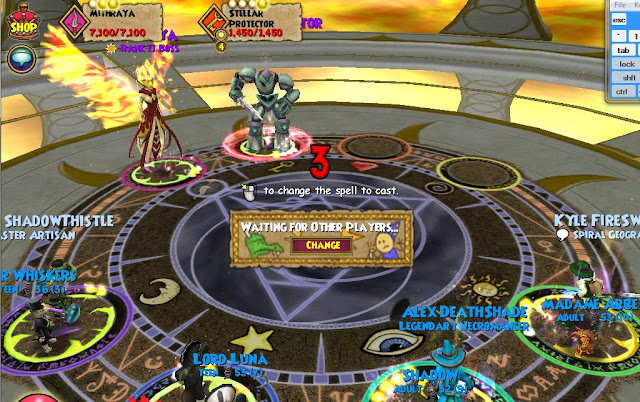 Gotta say,I really like Mithraya's 'look'. Her debuffs? Not so much.
No, didn't get any great drops, which was fine. Thank you Kestrel, Alex, and Kyle, it was fun!
I dinged again, and am 1 segment from dinging again, and am now creeping my way at the start of Stormriven. As a side note, I really like what seems to be an increase of physical puzzles and less-than-flat terrain pathing.

"The paths we take,  the choices we make, will lead us to the final chapter"
Posted by Fatal Exception at 4:02 PM