Got some non-pet stuff from Test Realm, for ya. A lot of this is out, at other sites, like W101 Info,  because we're all dedicated to exploring every nook and cranny of the new updates, but this is my spin on it.


First, I wanted to show the new wings, and staff 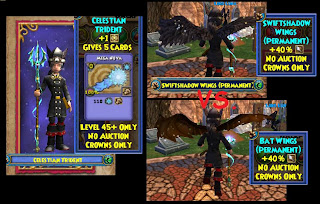 I am *so* getting those wings on LIVE (Notice Lord Luna 'free roaming' in the Graveyard?)
and the new spells: 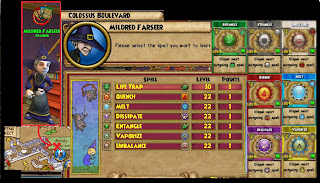 Hmm..Briskbreeze will get better, now.
All so very nice, don't you agree? KI is really raising the bar, and everybody wins!

And, I got my Pale Maiden, "Baby Abbey", but I desperately want to rename her "Emily", because I *loved* The Corpse Bride. Hopefully, on live, I will be so lucky.

Emily, my undead butterfly
Well, that's the "new" stuff, now on to today's nautically inspired portion, and some theorycrafting.

After seeing the new staff, I'm convinced that gear is gonna be replaced, rapidly. And that got me thinking. We need new equipment slots, (okay, maybe 'need' is too strong a word). In addition to the current slots, what about earrings, bracelets, or gloves? All of those are "do-able", but I had a brainstorm last night. First, a little historical tidbits.

Sailors "in the old days" were a terribly superstitious lot.  To help appease the gods of the sea, or denote some maritime accomplishment, often times they would get tattoos. Here's a list of the common ones, and what they meant:


HOLD, on the knuckles of one hand and FAST, on the other. This is said to help the seaman to better hold the riggings.
A PIG, on the top of one foot and a ROOSTER, on the other. This is said to protect the seaman from drowning, because both of these barnyard animals cannot swim so they would get the seaman quickly to shore.
An ANCHOR showed the seaman had sailed the Atlantic Ocean.
A FULL-RIGGED SHIP showed the seaman had sailed around Cape Horn.
A DRAGON showed the seaman had served on a China station.
A SHELLBACK TURTLE denotes a seaman who has crossed the equator.
A GOLDEN DRAGON denotes a seaman who has crossed the International Date Line.
PORT & STARBOARD ship lights were tattooed on the left (port) and right (starboard) side of the body.
ROPE, tattooed around the wrist meant the seaman was a deckhand.
"Whoa, whoa, Autumn! This is a kid-friendly game! We can't have tattoos!"

I agree completely... but you know what we *could* have?

FACEPAINTS!
With stitching, we can all dress "to our liking", without sacrificing "good gear". But still, all our faces are (generally) "the same" What if there was an uber-rare drop, or some wicked hard Boss that gave you a school-specific facepaint? Something that added a modest attack or defense bonus for the specific school indicated? Here's my idea for school-inspired facepaints:

Special thanks to our model, Al Nonomous.
So, whatcha think?

Contest note: The Homework Gobbler Giveaway will be announced *sometime* today, via Twitter. Last chance to be ready, ( I *did* roll a "d4-devious" over at Mythspent Youth )
Posted by Fatal Exception at 9:46 AM

I read too quickly over the tattoo descriptions, and was about to comment "Poor piggle and chicken" until I realized you said "tattoos" and not "real live animals."

I love this inflow of out-of-game information you provide everyday; thanks Autumn!

I too am loving these posts, Autumn!

I think the face paint idea would be great...hey, they love it in FR, so I'm sure many here would. The only people that might not love it as much would be PvP players...that is unless they wear ones that are false representations of their school, just as they are doing with clothes now.

So far the only things I am really "loving" about the updates in the test realm are the new items, as you mentioned. The entire pets thing is scary to me. It will change, completely, the game I fell in love with. And, honestly it's all sounding like more of a headache than an improvement.

Autumn you remind me of Sherlock Holmes! When I was reading your post it reminded me of this quote:
Sailor: You know your tatoos alright!
Holmes: I am intrested in many things.
:)

So they're adding Dispels for the other schools now? It'll be interesting to see what kind of chaos that brings to pvp.

Or what peace it will bring, Sierra :)

Myth Warlords are notorious for ranging anywhere from 1300 up to 1700, and that's without using treasures!

Their double hit spells make shielding a hassle and a waste of turns for their opponents, trying to block the follow-up; a waste of turns because they can just knock everything down with an Earthquake.

Plus, that ground-breaking spell is a built in damage reduction (can't blade against them).

Then you add in a Minion...Zeus have mercy on the other player, especially if they are going second.