Well, that was fun.

Worked my way "all by me onesies" all the way up to the Storm Father. Peeked in, and thought ,
"Oh, not just no, But Michigan, NO! ". Noting that my friend Blake Dragonblade was on, I asked him for some advice. Not only did he have advice, he had his own Team, in the form of Padric Bluerider and Reed Nightsword, who all came to thrash The Final Four with me. Here we are just prior to battle: 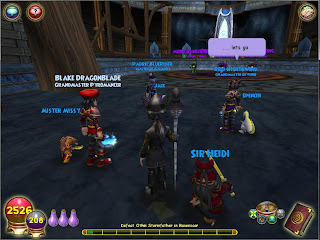 Now, I knew I was in good hands with these wizards. They, apparently, routinely fight together, in PvP and PvE. I could tell, because they were constantly communicating strategy amongst eachother. No stress. A lot of impressive "power" moves. I was actually watching THEM more than the 4 bosses we all came to kill. Co-operative Teamwork is a joy to behold! And, in "no time flat", we were done. 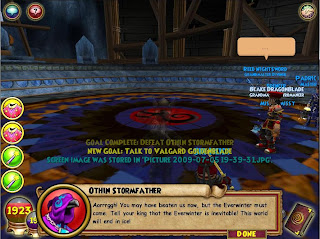 See that? not one, but *2* swords. The Ashbringer and the Wildbranch. One Death, one Life. I couldn't have asked for more.

As a special bonus, Blake had me teleport to him afterward, because there was someone who wanted to catch up with me. Know who it was? None other than Countess Shadowbane from "Tales of the Countess Shadowbane and Dragon Master DragonBlade " So, as you can see, I was in good company today, and a good time was had by all.

Bless you, one and all.
Posted by Fatal Exception at 8:06 PM

They are something to watch aren't they. I feel privledged every time I get to come along lol! And it was fantastic to finally meet you Autumn, even though I did run out kinda quick.

wow I'm not going to bother with Grizzlehim I am a crowns player so I want to just go with the main worlds for now.

Honestly,I believe GH is worth the purchase, especially for a "Wizard-on-the-rise". It plays so different than most of the other worlds, and graphically is my favorite, especially Ravenscar.