Farming in the future?

First off, an well-earned "Gratz" to Thomas Lionblood on finally getting his Kraysys boots! 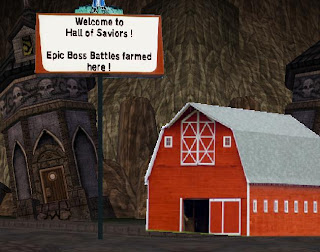 The whole thought of farming in W101 gave me an idea, recently. Something to "streamline" it a little. Let's call it "Hall of Saviors". You don't even need to make a new area: just make it a menu option at the Arena on Unicorn Way. Heck, you can even introduce it into the quest line:

You could even make re-beating every boss in the Hall an achievement:
Badge Earned: Hall monitor
No huge idea , here. Just a single location to go and revisit Boss battles that you've already beaten in the quest line, (like unlockable content). Here's an example:

I want to farm for the Wraith Statue. Only Grubb drops it, in Sunken City. Well, just getting to Grubb can be a half hour or more, each run. So, having run Sunken City "proper", Grubb becomes "unlocked" in the Hall of Saviors.
Now, instead of trudging through all the gates, and towers, and Marla, ect. I simply engage in the Final Battle with Grubb, in the Hall.
Note that nothing changes in this: he still has his minions. His drop rates are unaffected. It is the same battle as actually running Sunken City, but without all the extra filler of actually running Sunken City.

Now, take that same theory, and apply it to Malistaire. Once you've beaten him in the Crown of Fire, he becomes the final "unlockable" Boss in the Hall. Now, you can farm him "on demand", without all the stuff in between, arena-style.

Mind you, this is not a replacement, in any way, shape, or form, to the game's Quest lines. No Boss is available in the Hall untill it has been defeated in Quest. Moreover, a party member cannot join you in the farming until they have met the same requirements. Just like the Jotun Battle in GH, everybody needs to have done the brothers, or everybody gets to battle them again.

Or, say you prefer the "pre- patched patch" battle with the Jade Oni, you know the one I like to call "Helephants on Parade", where he summons the other Oni's? Simply select "Jade Oni-HARD" from a menu, vs. "Jade Oni-Normal".

To my mind, this idea kind of balances out the "easy farming" battles, where they're just inside a tower entrance, (or Oyotomi, for that matter), with the "have-to-run-the-whole-instance" like the Dean in the Labyrinth.

So, what do you think? Is this a viable idea, or does it, in some way, alter the playability of the game "proper"?
Posted by Fatal Exception at 8:28 AM

I love the idea, it's very similar to the idea's I myself have had lately too. Hopefully KI will take note of this, and implement them in future updates.

That is a great theory! I would love to have something like that!

Excellent idea! I hope this one gets picked up and implemented.

That Does sound great!
You wouldn't have to walk to the boss, it's right there! And the percentege of the drop is the same! Woo Hoo!

Hey, I found your blog through my good buddy, Friendly's, when he posted the "GASPS!" post. I just got around to reading it today. I think this is probably the best idea for Wiz101 I've EVER heard. No exaggertaion (sp?) And maybe after Mally, you unlocked another door, where you had to bring 3 friends and do all the bosses in a row! There of course would be a healing room, say every... 5 bosses? (For the challenge obviously.) Sort of like in Super Smash Bros Brawl (idk if you've ever played it. EPIC game btw.) in Boss Battle mode. You have to run through all ten bosses from story mode, and then fight the final boss. But, after every boss fight, you go back to this room where there are healing items. Obviously in Wiz101 that would be way too easy. I mean, we have potions and healing spells and stuff. That's why I say 5.

Doing this could get you oh... a "Master Farmer." badge. And maybe, if it's not too much, after you complete it you get the bosses' drops, and they would all be for your wizard's school? That'd be a nice reward.
Of course you're backpack would have to be almost empty for that to work... Maybe they could do it world by world....

Anyway, great blog! I hope you get a chance to read all this and reply (on MY blog would be cool ;D)