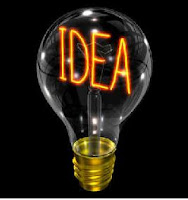 Well, you know how I gripe, every now and then, about "this and that", about content, ect, ect.
I am now gonna play "Devil's Advocate", and toss out some ideas for the next world.

Let's call it "Celestia". Original, no?

So, here we have it, a new world. A succesor to Dragonspire. The next step. If you're here, you know what you're doing, right? Good. Because were going to add a new idea to dueling: Dimension.

With this release , we have flight. No, don't ask me about the mechanics, I'm just an "ideas" person.

Up till now, you've had your basic, flat, "Battle Disc". We're gonna add height to it. Depending on the height you choose, your attack will increase, at a cost to defense, you stay where you are (like on a disc- nothing changes, or you drop to a "low, defensive position which increase your Defense, at a cost to your attack. Illustrated in this very crude cutaway: 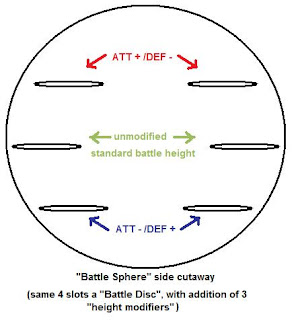 Now how would this look in an actual "Battle sphere"? Glad you asked. Here is a horrendous "Artist's Concept" . 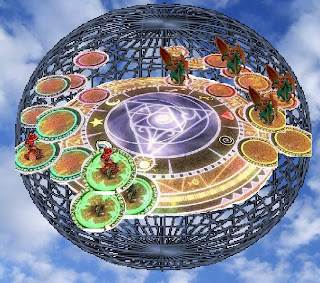 (You know, I really miss PhotoShop):
Height can be changed, once per turn, at the cost of "passing", making a height change a "0 pip" move. Say, you take a low position to build up your pips for a devastating attack, then have to take not one, but 2 turns moving up to"high attack". Pray you don't fizzle. All spell animations would play level middle, same a a disc.

Also, in this new world, there will be "spheres of influence". What this means is certain zones will have "bonus" ATT/Resistance to certain schools. The best way I can describe it is this:

Say you're in Firecat Alley. That's a "Fire" sphere of influence. All fire spells cast have, say a 10% increase in attack, and any Fire Mobs have an additional 10% Ice resistance. Does that make sense? I hope so, because I barely have it worked out, myself.

Do I realize the staggering programming and coding work that even this "simple" change would take? Well, vaguely. Remember, I'm an "ideas" person. That was an idea. My work here is done.

Feel free to begin debating the pros/cons of this idea. Does it merit consideration, or is it utter garbage? You decide.
Posted by Fatal Exception at 2:17 PM

I think it sounds interesting, but it's a little complicated for a kids game.

I made this idea instead as a world that is a lot more similar to the worlds we already have.
http://www.wizard101central.com/forums/showthread.php?t=9827

I like that but the one problem I see with it is there could be room for a total of about 13 enimys and 12 team mates how would they make it so only a total of 4 could join?

Sounds pretty cool to me!

Thanks, Friendly!
In retrospect, it would also work in a "forward/middle/back" setup, as well.

I've got you plugged over on my blog on this one. I smell a raiding discussion.

Wow
pretty complicated though
I like the idea of having a few heights so on one you could have a big attack and on the other there could be more defense
but still, where do you start?

You start in the "standard, no change" middle.