I want to know which School really rules. (Of course we know it's Death School, but who comes in a close second? lol). So, in tradition of Hogwart's Inter-house rivalry, I present you with the W101 version : 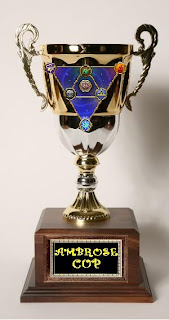 Yes, this soon-to-be-coveted award will be posted in honorarium to the school which can claw and cast it's way to the top. The winning School and it's team members will be posted prominently on this site for 1 year. Yes, that's right, 365 days. For all to see. And if you (preferrably) record the match via YouTube, I will gladly post the battles here, on this site.

Each school can have more than one team. Teams from the same school will (at the end) have to fight eachother for dominance. Like Highlander, "There can be only one".

What do you think? Is this something you, the readership, would be interested in?

Please do let me know.
Posted by Fatal Exception at 12:11 PM

Hmm, if DEATH is the "best" school, why is it that Myth, Storm, Life, Balance, and Fire are the top PvPing schools in the arena?

Alex once held the #1 pvping position out of the top one hundred.

Donna is in the top 5, I'm sure, though I haven't checked.

That's every school but death and ice!

Oh, By the way, I think there is already something like this.

Great idea! I can just imagine a 4 GM Necormancers vs 4 GM Life, that is a duel someone better be prepared to spend and entire day on! :)

@ C&C Point well taken, but what about "just" one school, per team?

Agreed that, in theory, (if we base arena builds vs "party" builds, like a classic MMO), Sure you can have 4 of (place school of choice here), but without an multi-school balance, does it not throw the team "off center".

I know for a fact that you have an excellent team. How would that same team play if all four of your were from the same school? Or does it not, indeed, matter? If that's the cas, then there's a class balance issue.


The point that I used "best" for Death is to further promote the inter-school rivalry, which you so kindly took the bait on. Thank you!

This post is in no way intended to replace, or even compete with Arena PvP, just, as stated, to promote inter-school/house rivalry, ala Hogwart's.

That Sounds like the pvp olympics!
Go fire, Storm, death, ice, myth,life and balance! Of course, fire is the best. What?!

lol, Then I guess our dueling would get REALLY easy.

A bunch of storms.

Ooh, I can imagine that now.

I was thining of something like that once. It would be called: Duel Or No Duel In it, all level ones fight all level twos fight, etc. Then, the best of each level go into a bunch of battles to find the best wizard.

Rules:
1. Must take off all your clothes. Why: Clothes give you and unfair health/card bonus.

3. Have Fun! And may the best wizar win.