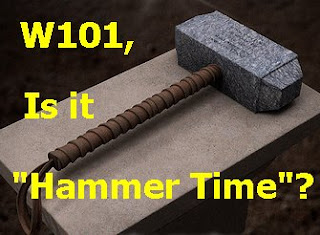 Well, we all knew it was inevitable. W101 is a successful MMO. And as such, it will have growing pains. With expanded chat, over 2 million players, and a rising chorus , Wizard City, saved from Malistaire, is beginning to smell a bit like the Old West. One possible solution: the most controversial, misused, and feared weapons in any MMO: The Banhammer.

Who should weild such fearsome power? Well KI, of course. Problem is, there's so few of them and so many of us.

Yes, we have a "report" button. We, (I), use it, as appropriate. Spammers, Con Artists, Filter Foilers, all fall prey to the button. Then it continues. I would absoloutely HATE to be the poor intern at KI who has to review each report , and weigh in on it's validity. That's a 48 hour-a-day job. It's like the "inbox" that never empties.

Then, there are "Player Mods", regular wizards like you and me, who are given the sacred duty to weild "minihammer" powers. Something like a "mute " button. Again, one has to have a dedicated Justicar to sift the valid, from the "grey area", from the invalid reports. KI could not well afford to have a bunch of Judge Dredds running around, lol.

So, what's a MMO to do? There are no expediently perfect answers. I was a Player Mod in ASDA Story before, I can tell you, it's a thankless task. Usually, it's done for the love of the game. When it become your JOB to interract with new players, (usually requiring hours per week, dedicated), only the strongest of characters can avoid becoming jaded. Seriously, how many time do you think you could answer "Where is Lord nightshade?" before you snapped?
10 times?
100 times?
Do you have the W101 Wiki on "speed dial"?
Nevermind the "Fine. ban me. I'll just make another account" types.
Familiarity breeds contempt. That's a HUGE sacrifice to make, on behalf of a game.

So, for the love of the game, what IS the solution? It only takes a few bad apples to spoil the bunch, and the Wizard City Commons , Shoping District, and PvP Arena areas are starting to become noticeable. It seems that the ones to be weeded are usually the ones with nothing to lose. Should there be a "Trial Member" realm? Problem is, *I'm a trial member, and I've all-but-finished catching up. So, a dedicated realm for "non subscribers" would hurt the Crowns Players. Unless they conferred some membership upon Crown Players. it just keeps getting messier as we go. How about Shops and arenas that only subscribers and Crown players can get to? How high do you raise the bar?

At least we don't have gold spammers.

Ideas?
Posted by Fatal Exception at 1:49 AM

Like I posted in the thread, as my UN on there is Xinaed, I am all for crown members getting the same benefits as subscribers, since after all they ARE paying to play the game in it's entirety.

I am for the in game mods. I'm not saying stand in one place and MOD the chats, etc. I mean, as your running around doing whatever you do, if and when you see something, do something about it.

Again, like I posted in there, I sat there and reported in one instance, 5 characters for cussing, and harrassing a couple other characters, for twenty minutes before I finally ran off. And when I did, the kids were still at it! Despite I reported, nothing immediate had been done.

Nothing could be done.

However, something needs to be done.

In my opinion, KI really needs to crack down on the filter. No more of:

Or anything like that, they need to make it so they cant say that combo within 30 seconds apart or something. And as for the other ways to put curse words? I have no ideas.