I have not been around the Spiral, lately. I took this measure to prevent "MMO burnout". You know, when you overplay a game, and in doing so, risk making it "not fun"?. So I've been on vacation.. in the Carribean. POTC Online, to be exact. You know Autumn Duskhunter, the Necromancer, but did you know Autumn Duskhunter is also a pirate? True fact! So, it's like "home away from home" whenever the voodoo spells some out.

All I can say is "POTC is NOT W101". (Duh!) Wow, I cannot believe Disney allows it's name on this game, Sure, W101 may have some "areas of opportunity", but POTC Online is just awful. Easily, one of the worst MMO's I've played in a while. More bugs than an exterminator's paradise. Which makes me appreciate W101 *so* much more. I even went a bought a game card for this game, to see if it improved anything. Two words: Never again. The $9.95/mo for 'pirates' isn't worth the same value you get from KI with W101. So, I'l stowaway with Baldur Goldenpaws, and get back to my Home Port in no time. 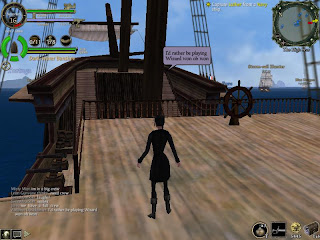 So, yes, I'm sitting here, watching Pokemon Marathon, waiting for a code. I haven't posted in a bit, and the blogosphere has been quite abuzz, has it not?

Aside from the pet codes, and test realm stuff, (which many fine blogs have already covered), I wanted to point out a couple recent posts that caught my eye:

1) Amber StarGem, my friend at The Myth Master created THIS post, in dedication to "Homework". All I can say is that I hope to be worthy of such friends. Rock on, Amber! I should have you over my house to show you "the" homework graveyard. (spent way too much at Bazaar, lol)

2) Valerian's has a great idea, also on the graveyard theme. A graveyard for Wizards. , a living memorial site to friendships past, now online at Wizard Graveyard.

Well, that's my little update, for the moment..back to watching resurrected fossils slug it out on Pokeon. I want me my Death Scarab...and I'm certainly earning it, *groan*.