Hello, fellow citizens of The Spiral!

Wee bit o' theorycrafting, today. With all the upgrades and emphasis on pets, (both the "good" and the "areas of opportunity"), I figured I 'd let my cerebellum go "free roam" in my internal lands&castles, when this bubbled to the surface:

"Instead of having to create a slew of new uber spells, why not upgrade what we have?"

Clarification: This applies to ALL schools, Death School is just my example.

Hmm. Let's explore this, a bit.
Well, for anyone who's made Grandmaster, in their school, how often do you *really* use those spells you gained "way back in the day", like, say, Krokotopia, or earlier. Maybe it's just me, but how many Grandmaster Necromancers actually use "Dark Sprite"? Since your game progression will always get harder (not easier) , and mobs will have increasingly high health, what of those early spells? The way I look at it, certain spells could use a boost, (from a Necromancer viewpoint..your school may vary): 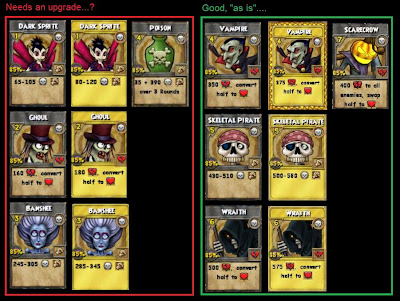 Sorry about that. No more late night movie marathons for Luna.

Anyways, for the above, highlighted spells, I see maybe having quests to upgrade them to "their next level", (like maybe a 30% damage increase, not sure on the math). But I'm not even really sure. Maybe the spells are useful "as is", so I'd like to know what you think. Do you have a Grandmaster (any school) that still uses their "entry level" spells, or is this an idea that some "formula guru" (I know you're out there) could take a further stab at?
Posted by Fatal Exception at 10:17 AM

My honest opinion is that the Death spells, what you have so far(as who knows you may yet get higher level ones when Celestia comes out) are perfect as they are. Death was not meant to be the heaviest hitter. You also have the one advantage than no other class has with both killing/damaging and healing yourself at the same time. They probably made, especially the leeching spells, a little low just for the fact that the leeching itself is such a huge advantage.

You might say: "Hey, you are Storm...so why do you care?"...I do have a Death Grand as well, and she was actually my second wizard and I had a lot of fun with her when I was questing with her, so I do know what it's like with these spells.

I think the ones that could use a little bit of a boost are still Ice, Life, and Myth. Myth really needs a AoE that does some real damage...past what the Frog can do. I used the Frog on my Myth Grand all the way through DS with the help of one of my Balance wizards(which was no picnic,) because otherwise it would have taken forever and been no fun at all to run Myth through DS. Even MS gets hard for them.

But, again, none of the above mentioned were meant to be heavy hitters. They all have more specialized talents.

I am hoping that with Celestia we ALL will get some improved spells that will help our specific classes a lot more. There sure are areas that could be improved on; Like how about a DoT for some of us who don't have a learned one?

I guess we all have at least one complaint about our favorite schools, don't we?...lol

I don't know... Part of the thing is that spells get cooler as they get better. Would you RATHER cast a hydra or a scarab beetle, even if they did the same damage? It's an interesting idea though...

Yes! I haven't fought against another Grandmaster Death Warlord who hasn't used Poison at least once!

Ironblood (my death/pvp character) has a special deck that I switch to whenever I am facing an area full of Life-type monsters, which I nickname "Weed-whacker." What's in it? Death Blades, Spirit Blades, Feints, and Poison.

There are times in PVP where I'll be glad I stuck a Ghoul in my deck for an inexpensive way of removing Death shields without triggering too many of the traps I placed for combo-ing. Poison works great in other cases, but its disadvantage is working two steps ahead of you.

I agree too and we should all give ki, a email for new spells they should also increase the levl cap to around 100 in the future...

Only time will tell /shrugs