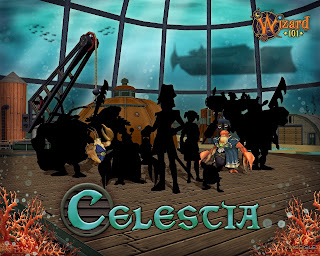 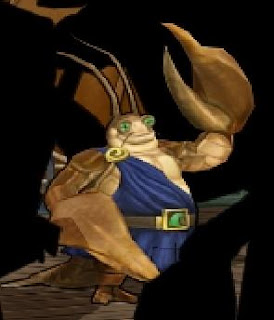 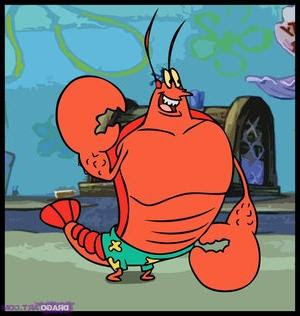 "Party time! Has anyone seen my toga?"


J.Todd Coleman *did* infer a “How about an Empire of Crabs with sort of a Roman feel?”, in the May/June Beckett's Massive MMO magazine interview...
Why, though is the revealed guy such a shrimp? (pun intended. okay, maybe it *is* a snapping shrimp, but I'm going with 'lobster', for the moment) I mean, look at Larry, from Spongebob, pretty 'buff', right? Well, he's nothing, compared to his South Australian Cousin, (also named Larry): 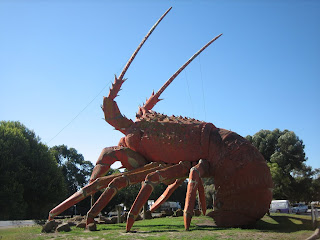 In Australia, a lobster puts YOU 'on the barbie', shrimp.

Lobsters are invertebrates, members of the Class Crustacea of the Phylum Arthropoda. (This class includes animals without backbones and with hard shells like crab, shrimp, crayfish, water fleas and wood lice.)
There are two kinds of lobsters, the "true" lobster (also called American lobster) and the spiny lobster. The true lobster has claws on the first four legs, lacking in the spiny lobster. The spiny lobster has a pair of horns above the eyes, lacking in the true lobster. Spiny lobsters also have two large cream-colored spots on the top of the second segment of the tail.
Lobster can have many different colors, including blue-green, blue, red, yellow, red-orange and white. Some lobsters come in two colors, having half of their shell one color and the other half another.
True lobsters have two very powerful claws. One claw is sharp and used for cutting, the other is bony and used for crushing. Lobsters that have their heavy ("crusher") claw on the right are considered "right-handed" and the others are "left-handed". Some lobsters are ambidextrous, they usually favor the claw that is the largest.
Lobsters can lose claws, legs, eyes and antennae through accident or self-defense, but are able to regenerate them.
If it *is* a 'Snapping Shrimp', though, like the 'pistol shrimp', this guy will be scary. Check out this video:


Judging by the 'reveal rate', it seems we still have a ways to go, for Celestia. Good thing we got the Pet Pavillion... Keep at it, KI!
Posted by Fatal Exception at 12:25 PM

Looks like they're satisfying the demand for the toga... ;)

Oh my gosh, that's as scary as The Ahnic Tomb!