As you may have figured out, I'm big on encouraging literacy, right? Well, today, on my twitter feed, I got a new "follower":  Clarissa Johal.  After a bit of investigation, (because we know that not all twitter-er-ers are 'legit', I discovered that Clarissa is a published author, (gratz!). Her current YA (Young Adult) offering? Pradee 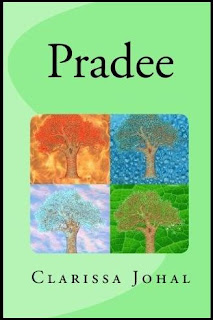 Clarissa's blog can be found HERE
So, what's it all about? The official synopsis is as follows:


"Pradee is a fantasy adventure of a world which has been divided by different races and belief systems. Four regions hang in the balance; all with unstable regional truces and allies. Pradee, a rural region, is inhabited by cooperative Shelled-Ones, Riverfolk and Burrowers. Juriss, a region to the south of Pradee, is populated by staunch and winged Lawkeepers. To the north is Datard, a place inhabited by bloodthirsty and feared Gamers. Then, there is the unexplored eastern region of Vel. Magical and mysterious, Vel may hold the key to a peaceful future for all regions. Three friends; Wex, Mourr and Cobweb, are accused of poisoning an Elder in their village. They escape to Vel in search of the Guardian of a mythical artifact. If they find the artifact; it is reputed to have the powers to see the past and change the future, thus proving their innocence. However, if it falls into the wrong hands, the artifact could destroy the future of their world as they know it."
Sounds like a good read. I'll be checking it out, myself, (although I'm chronologically too far afield of the 'Young Adult' category...just finished Dan Brown's 'Lost Symbol' in >24 hours)

Cool. I think I'll be checking that one out as well. I've been having trouble finding good books to read, so thanks for the suggestion!