Are you kidding me, KI?
That's it. I've lost patience. I spend over $200 on this game, and NOW you're gonna put an "Upgrade Now" button on my screen? You're going to give me Browser pop-ups? I don't think so.
You no longer have my support. I've seen a lot of MMO's go this route. it's simply called GREED. New pet cash-cards, and those just a re-statted pets from existing models? Weak. Instead of actually making the most of what you had going, you try over commercializing. You grew too fast. You would have been better off having your expansions lined up. You want to be a card based MMO? That's all well and good. You want the crown players to buy crowns, I understand that. You know what? you were too successful, too fast, and dropped the ball., as have many others. look at the progression of this blog- it hasn't been around very long, has it? Unless you work on scalability and modular design, you will never keep pace with the players. Unlike a WoW, Perfect World, or even Runes of Magic type mmo, where people heavily invest there time in their avatars, your gameplay time isn't going to keep pace with your content. The business/gaming balance seems to be tipping, and faster as time passes.

Granted, me leaving is no big loss. However, if I am just a vocal representation of your End Game player base, you're gonna be bleeding revenue. Sure, you got my money, but what happens when word gets out that Crown players get shafted? That it's a 3-month game? How many less crowns sell? Crafting is nothing more than a stall tactic. It's a very competitive market out there for MMO's, and you over-pushing subscription is really starting to take away from the "family feel" that this game used to have. Now, you're not "that special little mmo", you're "just another business model".

Unless you want W101 to be just another revolving door game, where revenues are from new players, not loyal, long-term ones.

"Gratz", KI..you're a self-inflicted victim of your own success.

I will be checking in, now and then, but for the most part, I'm spending my MMOney elsewhere. 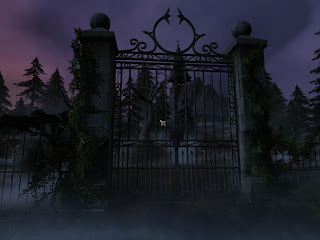 Now, to the rest of you: Bless you! I've met many great people in this game, and I will miss you, but I cannot sit and harvest ore all day, hoping for a diamond, and an expansion. Other MMO's have stolen my interest, and it's not necessarily for production value (like PoTC Online (=FAIL)) . Just for sheer "something to do" playability. Ether Saga Online, an old stand-by has been renewed to my level 76 character, and I'm currently working through the heretofore bypassed Perfect World. It's something to do. Better than running around looking for a gazillion diamonds for useless crafted gear.

On a final note, "hat's off" to Thomas Lionblood. As of Sept 20th, he will have been blogging w101 for a whole year. That's no small feat. But wil blogging coming to W101 Central, I have to wonder if it's going to become an oversaturated market. So, I take this time to recognize Friendly, in advance, Thomas Lionblood, GreatFather of W101 Blogging, the Commodore of the fleet: 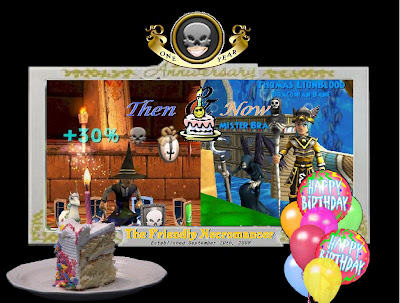 Because it's not likely to be repeated.
Posted by Fatal Exception at 9:13 PM

What???
NOOOOOOOOOOOOOOOOOOOOOOO!!!!!!!!!!!!!!!
We cannot lose you!!!!!!!!!!!!
You are a great blogger!!
Although I must agree, the are becoming just A MMORPG in a world of hundreds. It's not special aanymore. But you're closing down this blog? That's horror! It's horrible! I won't tell you what to do but, the members of this community are really gonna miss you.
That's all I have to say I guess.

Wait She is quiting? You cant do that! I think the comment above stated all i was gonna say.

Autumn, I hope that KI will do something soon to help change your mind. I love reading your blog! You are a tremendous writer and a joy to read - your humor is refreshing! Skeletal Pirates on Skates? Come on, that picture was AWESOME!

Please don't go. KI is going through growing pains as they finish their first full year of Wizard101. I see many changes coming to round out the player experience - maybe the first thing be loyal player retention.

Autumn. You will be missed. I understand and agree with every word of your message, and yet, I cannot at this point tear myself away. I think it has more to do with the friends I've made than the actual game play. The quests don't seem to matter anymore. It's who I do them with that counts now. I will miss seeing you around, my fellow necromancer. Best of luck.

I'm heartbroken. I want you to know that you're one of the only people I've even considered to be a guest writer for my blog. Your wit is bar none and you will be missed. Businesses do what they gotta do, and I may not agree with them, but at the end if the day, it's the people that make a game great. With you leaving, the game just stepped down a notch. Send me an email through my blog and let's chat about it.

Goodbye. Today we are losing a great blogger of wizard101. You will be missed. Escpically by me. You were the one who got a start to my blog. I will always keep that graveyard in my house with a stack of books in memory of autumn duskhunter.

Again Goodbye you will be missed.

You can't quit! All of us will really miss you Autumn, it is a great loss.

AWWW!!!!!! I really will miss you. You are an awsome person even thou I never went into a battle with you and I know you won't be playing I won't delet you off my list. I too see that button when I log on but it's been there since I started and it just dosn't faze me anymore. At first I found it agrivatieing too. Good bye I guess
Alyssa Silverheart level 24 diviner still a lover of Marlybone and Day dreamer of Grandmaster. :(

Aww not Autumn,:(. You were a great blogger, and we will always miss you.

So you are quitting?
You are pretty famous as friendly is.
We will all miss you. :(

Interesting. As an Access pass player myself, I'm pretty... hostile to the subscription system.

That said, I'm not sure you're making a strong case here. I need to peruse the rest of your site to see if I'm missing some backstory.

If you're just complaining about the popups and "Upgrade Now" button, yes, those are annoying, but they don't really impact the gameplay.

Autumn, I'm with you, I, too, am most likely going to quit.

This game has become just so frustrating.

It is so unbalanced, rude players, PvP problems, it's just a waste of money.

I hope I can find a better game, as well as you.

i can tell that people loved your blog, just read he comments and see misses you. i only read that today and i think you should continue blogging
i am a small blogger and i know how hard it is to blog but please continue!