I've had this idea. Something I've wanted to at least TRY. Something I haven't done before, and want your input on. "Fan Fiction". Not just any fanfic, however. Fanfic "with a twist".

Remember those old "Choose your own Adventure" type books? I'd like to try something like that, except YOU do the choosing, and I do the writing. Approximately once a week, (or so), a new chapter would get posted, and depend on the majority decision, via poll, of the readership from the week before. I can't guarantee how well this will work, or if it will work at all.
I already have a "test story". The beginning and end are already written, but it how we get from Alpha to Omega? That is yet to be decided.

So, as an example, I present , for your consideration, the first "Chosen Fate" fanfic: 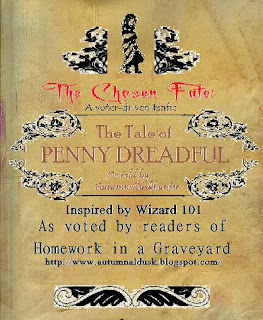 
Chapter One
A road less traveled 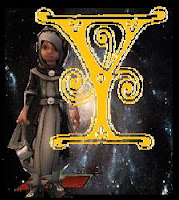 With her books and journal stewn about her feet, she watched the other wizards scurrying back and forth. There was a great buzz in the air, since the news was a small group of four Student Wizards had teamed up and defeated the Ominous Malistaire.

Penny sighed. It figured that someone else would have done that, because "poor Penny", as she was known, didn't do much at all.
Oh, sure, there was that one incident, where a fellow student had come and rescued her, but that was a while ago.

The young wizard stood there, and thought about her life...or, at least, as much of it there was. At least it was more than she would have had.

Originally, Penny was from a small farming community. How small? So small, it didn't even warrant a name. it was just "here". Had not fate intervened, she would have trudged out her weary existence as a milkmaid, destined for hunger, hard work, long hours, and little respect. But, as it would happen, Fate DID intervene, in the form of a mumbling Hedge Wizard, passing through her dust-blown village.

The Old wizard was rambling by on a wagon that had seen better days, and little maintainence. He sat up there,wrapped in a old and threadbare cloak,with just the slightest bulge under it, as if a package lay secured in it's folds. He was seemingly lost on thoughts of the horizon, as his stare hardly wavered. That is, until he caught sight of Penny.

"Oh, why, Hello!" The wizard beamed , startling Penny.
"Good afternoon, sir." Penny respectfully replied. It was well known that you should ALWAYS be respectful to a wizard, even a country bumpkin hedge wizard, lest you be turned into a frog.
"Oh, tish, tosh!" The wizard answered back, "No need for formalities with ME, m'dear!"
Penny was becoming increasingly uncomfortable. She was used to being invisible, or at least ignored. Now, here was a wizard, peering straight at her, almost, it seemed, straight THROUGH her, and not in an 'invisible' kind of way.

"Tell me, child.." continued the Old Hedge Wizard, "Is this your home?"
"Yes, sir, if it please you." stammered Penny.
The Hedge Wizard chuckled. "Well truth, is truth, my dear, whether it 'pleases me' , or not! What's your name, child?"
"Penny, sir. Penny Dreadful"
"Penny Dreadful, is it? Hmm..what an interesting choice of names."
"I'm sorry, sir..but I didn't choose it, myself. It was my parent's idea."
"I'm sure they thought it was." grinned the wizard, "Sometimes, we choose names. Sometimes, names choose us. Tell me, young Penny, where ARE your parents?"
"Out working the fields, sir. I'm just doing my chores."
"Of that, I have no doubt. Come, then, hop on up!"
"Hop on up? Sir, please, I beg you! Don't turn me into a frog, or something! Please!"

At this , the old wizzard actually guffawed, laughing with a full, earthy zeal.

"No worries, for you, M'dear. You and I have things to discuss..with your parents."
"W..wi..with my parents, sir?!" Penny was growing more and more concerned by the moment.
"Yes, yes! Nothing bad, oh no! Of that, you can be assured!"
Reluctantly Penny obeyed this wizard, and dutifully sat at his side, high in the wagon.
After an uncomfortably stilted 20 minutes, or so, the pair arrived, with Penny's direction, at her parents, working hard to cultivate some vegetation, in the arid soil.

Both of Penny's parents looked at their daughter, the Hedge wizard, and then each other. It wasn't Penny's style to get into trouble, especially with strangers. Especially, especially with Strangers who were magic users. It was Penny's father who spoke first.

"Good Morrow, M'lord Wizard!" He cautiously offered.
"Oh, my! Again with the unnecessary pleasantries! Well, it's no doubt where young Penny got her manners, ho,ho!"
"She's not crossed you, has she? If so, I humbly apologi.." The statement was abruptly cut off, with the raising of the Wizard's hand. (Best not to interrupt a wizard's interruption, you understand).

"Good, sir, let us pare this talk down to it's bones, as it were"
Penny shuddered. She had heard tales of wizard's abilities, and the idea of a wizard paring ANYTHING to it's bones was a very real picture in Penny's mind.
"I am here ", The Wizard had stated "To invite you to dinner. At your house."
Penny forgot herself for a moment. Forgot her fear. What nerve! They barely had enough to feed themselves, now this stranger was just going to invite himself to a share of that? Penny was sure she was going to go to bed hungry, tonight.
Apparently, so did Penny's father. "Good, sir, we're naught but humble farmers, and hard pressed to provide as it.."

Again, the Magic Hand of Interruption.

"Of that, Mr. Dreadful, you need have no worries. As a matter of fact, you will have more when I leave, than when I arrived. And less.", he added, a knowing twinkle in his eye.

Well, there *is* more, of course, IF you, the readers, choose. Since there isn't a decision (in the story) to be made, I ask you to comment on whether or not this little literary project is worth continuing, or if better left to more capable writers. Penny's Fate, as well as this project's, are yours to decide.

Posted by Fatal Exception at 10:33 AM

Wow, cool story and I sure want to hear more. Seems to me, your definitly a capable enough writer to continue.

So I vote YES continue!!

Continue! You are a great writer.

sweet!!!! I love writeings like that thats why I want to be an auther!

You've got me hooked. Just how did a farm kid end up studying Necromancy? And where do they hide the farms in Marleybone? Is this how her parents ended up living there with all those dogs in the first place?

BAH! WRITE MORE! LIKE, RIGHT NAO! That is some spiffy writing!

Okay, that is WICKED GOOD writing skills dude!
So my answer would be a yes!

So where's the next chapter already? ;-) I think you spin a fine tale and one that I would definitely follow.

You are a pretty good writer. Minor syntax errors, but nothing big. However, you seem to have forgotten that Penny's parents attended Ravenwood while Malistaire was still a nice guy.