Advisory: This post is about general game economics, and not W101 "specific" stuff, so feel free to skip it. (or, educate yourself a little more, and make yourself a more "well rounded gamer") 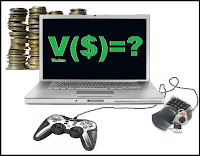 Gonna take a stab at this subject. I'm going to say right off the start, that this post is no way "all inclusive", like some Caribbean Cruise. It's going to be a quick overview of the dreaded money subject, in regards to MMO's. If MMO's are still kind of new to you, I'd suggest al least reading Wikipedia's MMO definition, as a good general primer. This subject, however is WAY too involved to be wrapped in up one post. In fact, I think you should just spend some time over at Gamasutra, and MMOGCHART, since a lot of my resources for this post all seem to end up coming from that direction. The better you know how the industry works, the better you can understand your little corner of the MMO Universe. You know the industry "bigwigs" read this kinda stuff, so why shouldn't you?

To quote Phineas and Ferb: "Yes. Yes, I am.". However, this is going to be more ex'pose, less "I want". Refreshing, huh?

I have absolutely no problem spending money for a game, whether it be "up front" at the display case, or online; Subscription, or "Free to play", (which I intentionally put in quotes, because "free" rarely stays free. Long ago, while playing Rohan:Blood Feud, I wrote a post about the whole subject of "free" players constantly hating on, what I termed "The Cashop Warrior" .

So, let's look at MMOney, shall we? 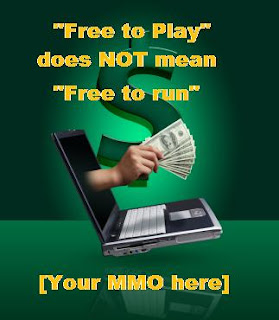 Remember: it IS a business.

That's no "chump change". Remember, for you and me, it's a little "log-in vacation" to get away for a while. For people on the other side of the server, it's the food on their table at home. However, let's not look at that as all free money, since MMO's have to deal with fraud, like anyone else.

First, a little "Industry Lingo". There's 2 acronyms, related, yet very different. ARPU and ARPPU, neither of which have anything to do with Associations of Retired Persons, (though I'm sure we have gamers from THAT community, as well)

These are terms used to help calculate how "well" a business, (in our case, a MMO), is doing. Now, HOW a company reports (ARPU/ARPPU) makes a lot of difference, as seen here. (The "other" method is to drive through the Employee Parking Lot: Is it a "used card dealership", or an Aston-Martin showroom? )

Programmers, Buildings, Servers, bandwidth and electricity all cost money. "Free to Play(F2P)" does not mean "Free to run". A MMO, without question, HAS to make money, or it will fold like a cheap lawn chair. There's 2 ways to do it:

1) Subscription, (and I'm gonna put in "via Game Card" in this category): W101 Has this.
2) 'Microtransaction': (In-game store/Cash Shop/Item Mall/Prospector Zeke). W101 has this, as well. This is the primary system for many Asian "F2P" games. (being a "Cashop Warrior", I love these games.)

You're smart. You know how those work. Unless W101 is your first MMO, you've likely encountered one, or both of those systems, elsewhere. W101, has both. 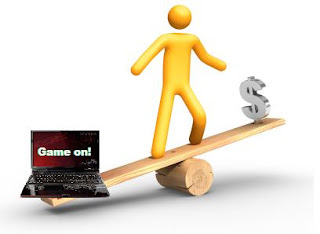 It's all about YOU

Now, *this* is where we get into dangerous territory. This is not a concrete aspect, as is economics. This is a personal perspective. As Tesh recently commented (Yes, this is a comment, not it's own post ganked from somewhere else on the 'net):

"That anonymous comment actually echoes a lot of comments I see across the "blogosphere" of late. There is a growing sense that the "endgame raiding" treadmill game design is overused, and honestly, anyone ragequitting when they have a level-capped character who has "done everything" will likely be the subject of this sort of suspicion. A lot of players *do* want that sort of Groundhog Day existence, but a lot of others are sick and tired of it (rightfully, methinketh).

It really is OK for a player to finish with a game, even an MMO. It's especially nice that W101 Access Passes (like Guild Wars before it) allows players to keep in touch with friends without ponying up a subscription fee. But really, if you *have* gone through everything and had a blast doing so, and find little else that interests you (including alts), it's OK to be done with the game. Better to go out on a high point than drudge on forever on the raiding treadmill.

It might be good to ask: Did you feel like you got your money's worth out of the game? Do you feel that you overpaid? (And notably, if they *do* start churning out more content, you'd probably have to pay *more* to access it.) If you can make a good case that your money was ill spent, that's something that King's Isle really should pay attention to. If you're just burned out and finished with the game, taking a break is perfect. If you still have friends in the game (and it sure seems to me that you have some good ones), it's awesome that you can still come by for a visit. :)

To me, that's the strength of the Access Pass model. You can leave and come back without incurring more costs. I love that about GW and W101."

Wow, huh? Now that's a comment! (if you think that's good, check out the blog).

Value, and the MMO are a personal relationship. Many a MMO has "gone by the wayside" on my C:\ drive. The half-life of a mmo on my desktop averages from 2 days to 2 years, depending on cost/playability/replayability. (WoW finally got the boot, after a year of not playing). Once I find "The One"(of the moment), it gets my full attention-which usually means "endgame". Then, the search begins anew. Very few stay on the hard drive, unless re-visiting them doesn't cost me anything. Current examples: Free Realms, Perfect World International, and Ether Saga Online. W101 is also in this category, because my investment is secured. They run good on my laptop, don't incur a subscription, and keep me "checking in".

I could give you a long list of what I've played, but it's pointless. It's MY list. You have YOUR list. "What stays", and "what goes" are as individual as we, the individual players. This is where a lot of my personal frustrations lay. As a "Crowns" player, the investment we make, over time, does not give us the same level of 'recognition' that a subscription player gets. There's no 'threshold'. Spend $10 on Crowns, spend $200 on Crowns. Doesn't matter. We still want your subscription. To that , I say "Give me a reason, because PvP, and forum 'priveledges' aren't near enough.

So, what is a MMO worth? Honestly, it's only worth what players are willing to pay for it, pure and simple.
Despite the rants, raves, and ragequits, I have enjoyed my time with W101.

Even if it's only to give myself more things to write about for you. For, to me, you, the player base, have far more intrinsic value that any collection of 1's and 0's. And I'm not gonna charge you a single penny.

All i have to say is,woah, p.s. the binary says Be well!

Sadly it's all about the money these days and no games are free.

It's not about wanting games to be free, TET, it's about providing a fair value for cost. I'm very much against the subscription model because it bears little relation to the cost of a game, and it doesn't offer good value to the casual player (which is the mainstream player). Microtransaction models provide a more granular system that can allow patrons to tailor their own expenditures, and everyone can set their own "fair price" by choosing what they want to pay for. Some will naturally get more out of a sub, which is why it's important that *both* are offered.

Puzzle Pirates is the game I keep pointing back to when I get around to talking economics. Their dual currency system (in-game gold "Pieces of Eight" and cash-purchased doubloons) works extremely well, largely in part because players can buy and sell between the two with the blind currency exchange in the game. That fungibility between cash and in-game time earning PoE not only makes it easier for everyone to get what they want out of the game at what cost they want, but it also fosters the community interaction, since players drive the economy.

There are also subscription servers and MT servers, and notably, it's the MT servers that have proven most profitable. Three Rings, the devs, have not added any new sub servers since their early days, but have created almost four times as many MT servers because that's where they earn more money. When you treat the customer well, they tend to want to give you money, and Three Rings does a great job.

Puzzle Pirates also has the greatest MMO community that I've ever seen, and I think that a big part of that is the ability to casually pop back into the game without paying a sub fee for the month. People stay in touch, help each other on the forums (and get involved with events), and in general, are a great set of players.

Great article, Autumn! Thanks for the link! (Though, embarrassment of embarrassments, today is one of those days that I posted something fairly silly, instead of my usual wall of pontification. Go figure. :))