Grandma is happy, and so am I

Well, there I was, grinding my way through Wintertusk ,when who should fire off a PM ? My friend, the ever-awesome Bailey Skystaff (you know who she is), who graciously volunteered to come assist me with Nordstrom (yeah, I know it's misspelled, I just like shopping, k?). Not only that, she brought along "The Mistshard Twins" , ( Destiny and Grace), who had that whole spooky "finish each other's sentences" thing going on.

It's a good thing they *did* come to battle with me, because , of course, Autumn had *no* idea what to expect, and would have failed utterly trying it "all by me onesies". I cannot thank Bailey and The Mistshards enough, because their presence made ALL the difference. Bailey had mentioned that "You Death people always play by yourselves", and she's right (in my case, at least): I do solo way too much, and often miss out on the joy that is co-operative battling. So, the Company that I *did* have was doubly-appreciated!

All said and done,it was a LOT of fun, and of course, it went very quickly, and at the end of it all, one *very* good looking group gathered for a victory pose:
I'll admit, my performance was "less than stellar", I mis-bladed, and had trouble keeping up with the other 3, but Lord Harley impressed me with an I-never-saw-this-before *double* Spritely. I only got to use 'Crow, once, but I did fire off a couple Virulent Plagues. Oh, didn't mention? Unlike Dark Pact, I can see me using this one, often. Yeah, it's *almost time to think about The Arena, again. 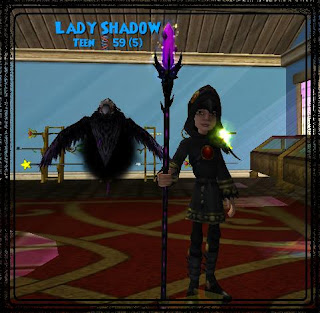 And guess who hatched? Yup, Lady Shadow has been welcomed into the fold. I'm still training her up, to see what she's able to "bring to the table". This, of course does not alleviate my desire for a Dark Crow, but it does take another item off the "DO WANT" list.

Even if I can't utilize her in combat, for just 'hanging around', she's just so cool.

One thing I'd like to see more of, in W101 is more Transformations. KI has *so* many cool creatures in The Spir@l .and I *almost* missed out on the Coven Warrior transformation (from a Tyra quest), because I was mounted, at the time, and never saw the change, until well after the quest was completed.

Yeah, I know "I want" a lot, but KI keeps on delivering, so why shouldn't I keep raising the bar?


So, Wintertusk is done. As in "Done" done. I can say, without doubt, that in my opinion Grizzleheim and Wintertusk feel most "W101", to me. Maybe it's because I'm keen on the cultural reference. Maybe it's the smooth terrain mapping. Maybe it's something else. Every new release from KI ever furthers the skill and magic of gaming that is Our Spiral, and I am ever curious as to how they're going to out-do themselves next.

Yes, Waterworks, I'm looking at you...

Be Well!
Posted by Fatal Exception at 7:49 PM

i have a question. I have been seeing alot of pets in the spiral perform their own spells. I have many and want to know if it's only a select of pets or what?