Heya, peeps!
Finally got around to getting my Harvest Lord, last night, and the timer on the egg finally expired, today, Yay, 'Crow! So, of course, I spent some time, (and a healthy amount of crowns) in the Pet Pavillion, to go get "Lord Harley", (wish they had a 'Harvey'- get it ? "Lord Harvey, the Harvest Lord?). So, this is who I have, now: 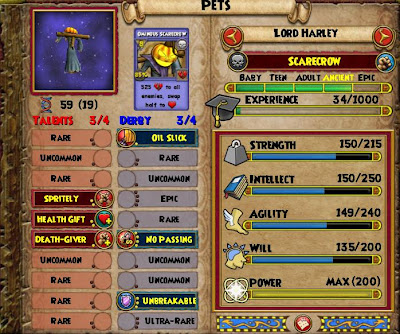 Squee! I haz scarecrow! Squee! It has *spritely*! Did I mention "Squee!"
Also, since I had him all leveled, 'n stuff, I swung by the Hatchery, because there's a certain hybrid I just *have* to have, and guess who got lucky on their first hatch attempt? 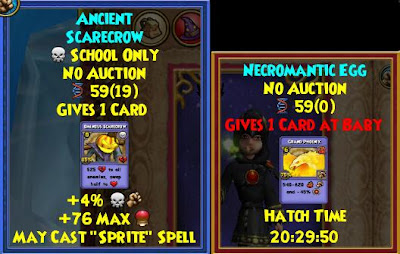 Now that I have been able to actually participate in Wintertusk, one of the things that has really struck me is how far KingIsle and W101 have come, since "the old days". Particularly, just take a look at how the quality of the terrain maps have improved drastically. From the old "ride on rails" flatlands with 45degree ramps, to the smooth, serpentine pathways of Celestia, and Wintertusk. (lousy wireframe overlay by yours, truly): 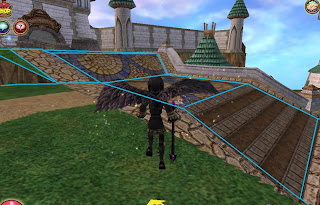 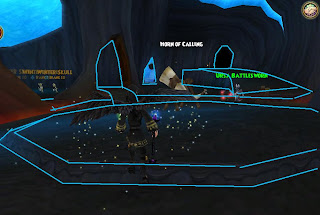 So much more fluid, and smoother, ins, outs, and fewer sharp angles.
The addition, over time, of things to go over, under, and around, without the feel of running down a perpetual corridor, the feel less of a single, flat plane, give the world a much more overall fluid feel, and much less the idea that the player is running around in a shoebox diorama. So, I have to give KI "props" on their continued advancement.

In regards to continued advancement, I firmly believe that W101 will eventually, (later, if not sooner) unlock the "Z Axis" in The Spir@l.  To simplify: I think we will eventually have true flight, instead of "hovering" mounts. It's really the next logical step, although, admittedly, it would require an exhaustive engine overhaul, or limitation to the next new world. Fly for the Win!

Speaking of New Worlds, (yeah, as if WinterTusk is "old", already, lol), Ever stop to wonder what may be right below your feet, as you run across The Commons? Think about it: there are several buildings that serve no (apparent) purpose, and any one of them could be an access point to a vast underground area (Wizard Mines, anyone?). How to have a new place, without a New World. Combine flight, for "hopping" from ledge to ledge, oooh! And Wizard "Mecha" suit mounts, that didn't go *poof*, when you went into battle, adding (upgradable) combat stats, much like pets, only using Boss Drop parts. "Gee, I have to go back to MooShu, and farm Jade Oni for my Mech Power generator", lol.  Those would be like Ultimate mounts, tailored by School, (and banned from Arena PvP, or course). My artistic abilities are nowhere near enough to illustrate that, lol.

Thanks for this post and insight on the evolution of Wizard101's terrain texture! For more examples of fluidity, the sand hills near the oasis within the Sultan's Palace follows along with this advancement. I loved how I didn't just "bump" into some awkward, invisible boundary as soon as a slope formed. Perfect for freestyle "rugging"!