You really should know me, by now, lol

Like you, I read other blogs (I really do!). Some of my best friends in W101 are fellow bloggers. In fact, I always dread doing "a list", because even if I named a hundred blogs, I'm sure I'd miss someone. A good starting point can be found at Kestrel Shadowthistle's post. I'll also toss in a new entry, Duncan Daystone, over at Wizard Philosophy 101 (Oh, Duncan, you had me at "Steampunk"). We, in the W101 blogosphere are an ever-growing family, where wizards take on the extra-curricular challenge of creative blogging.

This is something that I wanted to write (while it was still topical) during the "8 Bit Trials", but I just couldn't work it in. Our dear Cassandra Griffindreamer, artist of Our Spiral, brought up a very interesting point of data over at Witchwarrior 101, in this post.concerning a new Congressional Bill, sponsored by Senator Amy Klobuchar .

S.978 - A bill to amend the criminal penalty provision for criminal infringement of a copyright, and for other purposes.
"Makes unauthorized web streaming of copyrighted content a felony with a possible penalty of up to 5 years in prison. Illegal streaming of copyrighted content is defined in the bill as an offense that "consists of 10 or more public performances by electronic means, during any 180-day period, of 1 or more copyrighted works" and has a total economic value, either to the copyright holder or the infringer, of at least $2,500"

Now, of course, this seems to concentrate on *streaming* media, like YouTube, and such, but it is something that most of us bloggers need to pay heed to. How many blogs have you seen with embedded fan videos? I know that I've embedded at least a dozen, or so. Come to think of it, name me ONE fansite, anywhere, that doesn't use themes, terms, and imagery from the (object) that they're a fan of. Betchayoucant. 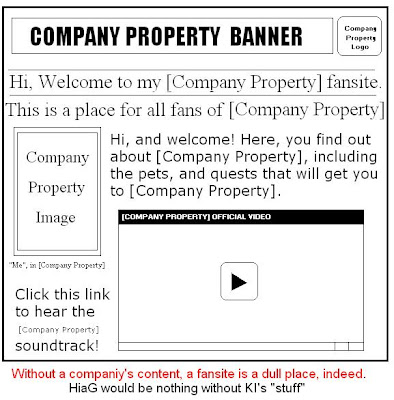 We, as W101 fansites, and W101 fanblogs need to remember that we are holders of a Sacred Trust, concerning Wizard 101. Even though we are independent voices, we act as a mirror for both KingsIsle, and KI's player community. We represent much more than ourselves when we write. That's not to say that we have to be always-adoring "yes men", 100% of the time, but we *do* hold a personal responsibility for what we put in our sites. For the most part, we in the W101 sphere don't have to spend restless nights, waiting on INTERPOL to knock on our doors; we have a Company that genuinely encourages fan participation. We are blessed, like that.

It is not so true for the rest of the 'Net, however. Take, for example, this clause taken from "the other" MMO, (you know that one with the cow people that *don't* live in Mu Shoo). I'll give you another hint: the company's name rhymes with "Lizzard".

All title, ownership and intellectual property rights in and to the interactive games produced by Lizzard Entertainment, Inc., a Delaware corporation, ("Lizzard"), including, but not limited to the interactive products developed as part of Lizzard's Warcradle, StarCradle, and Diabloom interactive product lines. This may include any titles, computer code, themes, objects, characters, character names, stories, dialog, catch phrases, locations, concepts, artwork, structural or landscape designs, animations, sounds, musical compositions and recordings, audio-visual effects, storylines, character likenesses, methods of operation, moral rights, and any related documentation, all of which are owned or licensed by Lizzard, and are protected by the copyright laws of the United States, international treaties and conventions, and other applicable laws ("Lizzard Property")."

Look at the details in that paragraph. Basically sums up as "If you saw it, heard it, or were inspired by anything *in our games*, it's ours". It then goes on to say , basically, "Sure, you can do fan art, but you can't make any money doing it", which is more than fair, because when you play a mmo, any mmo, you are immersing in that company's intellectual property. This blog post offers a good oversight as to what you should do to keep yourself , as a fan, "safe".

Now, if you look back at the recent "8 Bit Trials", I should have gotten *additional* permission from Mainframe Entertainment, (now Rainmaker Entertainment), in addition to the current understanding of permission I have from KingsIsle. If Rainmaker wanted to, they could very well hunt me down, and serve me legal papers. Just like that. Since "Homework" has never (and will never) be used as a commercial venture, it's unlikely that I'll run into too much trouble. Stay away from money- it's evil. Give it to KingsIsle, they're pros- they can handle it. But, oh, I *do* so love my pop-cultural reference materials...

Sure, it's unlikely I'd hit legal problems, but possible. And it's the same anytime we, as bloggers use someone else's media. So, it's best that we treat their property with respect, and keep it in  the "same vein" as the original media was distributed. (For instance, NOT using W101 to create a slash-horror 'chainsaw massacre', as opposed to the opening parody). I'm not pointing any fingers, at anyone, because it's a lesson that *I* have to be reminded of, on occasion. And "just" because I'm an "Official" fansite doesn't mean I can get fast-and-loose with the interpretations. Why, look what happened to Steve Vander Ark, who went from fansite to defendant. If I were to point a finger, there'd be three pointing back at me.

I'm sure that KI has (little-to-) no issue with most of my shenanigans, because, overall, I mean well. But I guaran-gosh-darn-tee that if I started selling "Tenure for Dworgyn" coffee mugs, I'd get called before Merle Ambrose in half a heartbeat. And you know what? I'd have to agree with them. Like I said, stay away from money.

Little things, like attribution, and linkbacks, and an understanding of Fair Use  and Derivitave works can go a LONG way to minimize issues. Not only with liscensed media, but with our fellow bloggers, as well.

Creative inspiration is a tricky thing, and (depending on who you ask) "No idea nowadays is truly unique". Some would argue there are only (1,3,7,20,36) basic story plots., so toes will inevitably be stepped on, in one way or another. So, it's best that we all walk around in bunny slippers, as opposed to steel-toed boots.

This is far too deep a subject for a single post to do proper justice. Just use it as a 'thinking point', for consideration. I thank KingsIsle for the opportunity to share the 'W101 Love', and I thank YOU for reading.

Posted by Fatal Exception at 12:59 AM

Yeah... Oh to enter the foggy and treacherous domain of "property". But if there's one thing I know, there's a lovely little phrase that goes "public domain" from which many parodies and references can be drawn with harm to no one save Oscar Wilde's ghost who may be pained to be compared to a pixelated wizard.

Well said, as usual, especially on such a confusing and uncertain subject.
And thanks for the plug :) Love steampunk.